Art at the Pools 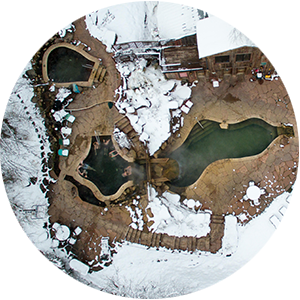 The Avalanche Ranch hot springs were designed and built between 2008-2010. In the initial phases, we hosted a charette. We brought together the family (which includes a teacher, photographer, two contractors and resident manager), an engineer, landscape designer, and business planner. We met over a number of days and drafted a master plan. The collaborative design far exceeded what any one of us could do singularly. Bringing different visions and talent together to create a beautiful space set a precedent that we still follow today.

When I take a moment to sit in the springs, I love to look at and reflect on the details. 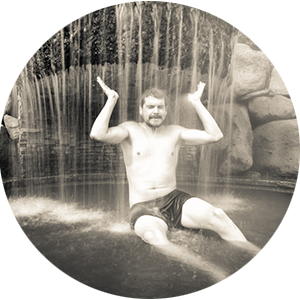 All of the rocks that are placed around the pool landscape were collected nearby. My husband Tai, and a man we call the “rock-guy” (who I have since forgotten his proper name) worked together to place them. Tai is linear and practical and he drove the excavator. The “rock-guy” was zany, artsy and seemingly drunk most of the time. His mind was anything but linear. Somehow they made the perfect team. Conglomerates were placed together to form a private screen in the top pool. A rock that mimics the shape of Elephant Mountain was placed next to the stream on the patio by the middle pool. The “bird bath” rock was placed perfectly at the base of the stairs, dotted with lichen. The rock under the waterfall and all the rocks in the wall were found here and there on the property. We had walked by them for years. Leaned against them. Now they are flipped upside down, 90 degrees and puzzled together. I like to think that it all looks “natural” even though it was constructed by men. 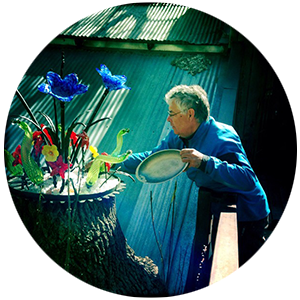 The bridge to the upper story of the barn was designed to flow through two branches of a Boxelder Tree. The trees rose above the middle pool to form a shifting canopy. On a quiet summer day, a Boxelder tree in the yard of the Ranch House fell without warning and luckily without incident. We started looking around and the potential danger threw every tree into question. The two branches that framed the bridge stemmed from one root we found to be rotten and compromised. Safety first, aesthetics second. When we took them down there was a void. So we commissioned David Powers, a hot glass artist, to create two pieces. David works as an artist and teacher at the Colorado Rocky Mountain School in Carbondale. He formally taught ceramics and was my teacher in High School. I had seen his glass flowers with iron stems and thought it would be great to bring color to the Pool area and have an eternal garden. His pieces now sit balanced on either side of the bridge. Blue, red and yellow bursting out of a former Boxelder tree. 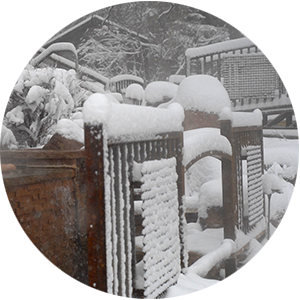 The ironwork around the Hot Springs was designed by my husband, Tai and welded by Diego Garcia. Diego is a soft-spoken man who has been welding for 15 years. Prior to learning to weld he was in the fashion industry in Mexico and designed jeans. If you look closely at the joints in the railings and gates it is hard to believe they were done by hand. Impeccably crafted by a perfectionist. I asked Diego if he thought of his work as structural or artistic and he prefers both. 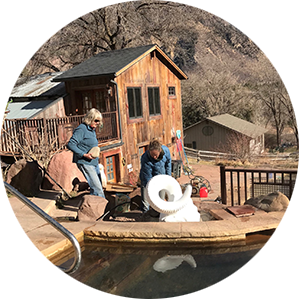 The most recent addition to the creative scene by the Hot Springs is a marble sculpture by the middle pool. I could not keep a plant alive in the garden by the waterfall. I tried a sage bush and two types of willow. Thinking a riparian plant would work with the riverbank feel. But the steam and extreme contrast of cold and hot seemed determined to kill. So I opted for art. Local artist, Judy Fox-Perry, started working in marble a few years ago. She attends the Marble/marble Symposium in the summers where she works alongside other artists. At the symposium, sculptors of all ages, with various levels of experience and expertise, work on their individual pieces during each intense 8-day workshop session. There are 3 sessions per summer. Judy bought the piece of marble, weighing in at 1000 lbs, from the quarry in Marble (just 13 miles South of us) and began working on it in the company of other artists at the symposium. The inspiration for the piece was drawn from the herd of Bighorn Sheep that reside up Avalanche Creek. Judy studied the pool site as well as various skulls and pictures of Bighorns. When you sit in the middle pool there is an aperture through the horn to view the ridge and peak across the valley. I like to run my hand along the perfectly white smooth surface of the curve. On the east side of the sculpture, there is a fun surprise for all ages.